This past week OPALCO handed out rebate checks totaling $22,184.00.  The two custom designed energy efficiency projects are expected to save 137,075 kWh per year.  That is equivalent to taking approximately 11 average houses off the grid.

The first project was at Friday Harbor Elementary School where United Energy Engineers installed two variable speed drives for the heat pump circulating system. This project was measured post-install by BPA and is saving more energy than estimated!

The second project was at the Orcas Emmanuel Episcopal Church where local contractors, Greg Reboulet and Sage Building, installed weatherization measures in the shell of the building. The old water-facing windows were replaced.  Insulation was added to the attic and the crawlspace after a great deal of air sealing was performed. 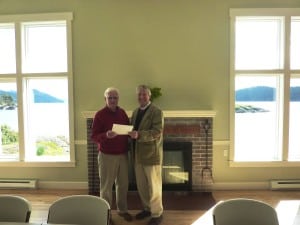 George Garrels (l) and Bishop Craig Anderson(r) receive their check in front of the new windows. 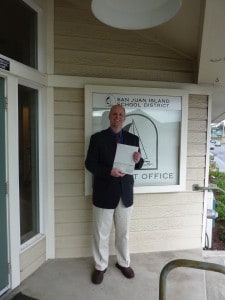